Brexit isn't stealing any child's future, it's protecting it 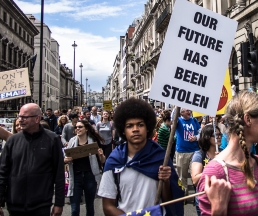 In a short burst of 10 tweets I challenged the EUphile narrative of Brexit stealing children's futures as one of the most idiotic claims they've made, and that's saying something. They have no way of knowing what the EU will look like in 5 years time, let alone when our kids are adults. But we have a good idea. So let's look beyond the remainers' superficial soundbites, because they won't.

The EU's ever closer union is about turning the current political union into an entity aiming to have one European government, which is intentionally anti democratic. What kind of future have we allegedly stolen by voting to leave the EU? Consider.

Decision making will be increasingly removed from nation states as ever closer union creates a federal EU. Decision making will be centralised in institutions that are unaccountable to voters and determined by bureaucrats who have not been elected and cannot be removed by us. We are already seeing the advent of an EU army, and a creeping advance of a form of legal system that will lead to the eradication of the principle of innocent unless proven guilty - a basic principle of law in our country.

The UK has passively let the EU have its way on political matters for decades, in a ridiculous effort to show what good Europeans we are. As a result British interests have been disregarded time and again. On occasion the UK has strongly objected to European Commission proposals and has formally opposed and rejected them, but on each of those occasions we have been over ruled and outvoted in Brussels. Our supposed influence has been shown to be toothless. Despite this, British tax pounds continue to be hoovered up by the billion and used to further aims we are powerless to influence or stop. The percentage of our money that comes back here is spent exclusively on matters the EU decides is a priority.

By remaining in the EU we would be living in a world where you can vote for who you like, but those who make the decisions cannot be removed or held to account, rendering change utterly impossible. People can protest all they like, it would be to no avail. No one that is elected by British voters would have the power to effect change as the EU was constructed to remove any form of political power from the people. Think on that a while.

Staying in the EU would mean a future where Britons may only speak on the world stage if they are wearing an EU flag and have been permitted to speak by Brussels, and then they must advance a diluted compromise position of 28 countries that rarely suits the interests of more than a handful. A future where rules and standards continue to be made without our direct input on global bodies, and with no opportunity to influence and negotiate terms that could help our businesses and benefit our people.

It would be remain a world where we have no say over what we can or cannot import from outside the EU because our trade rules are made in Brussels. We would have no ability to refuse adding extra cost added to things such as food and goods because we must apply the EU's trade tariffs.

It would be a future where political propaganda is cascaded through our schools to brainwash kids to an even greater extent than the EU already does. The generation of kids in schools and colleges has been fed a relentless diet of positive messages about being part of the EU, with no mention of any of the negatives I've mentioned above. Our kids are not taught how to think any more, but what to think. As the education systems of our trading partners and competitors in other parts of the world leap forward in maths, science and technology, ours are falling down the attainment league tables. It is a litany of defeat.

No. We've not stolen the future of British children. By voting to leave the EU we've preserved their ability to shape and control it in a way the EU's remaining citizens will envy. So let's have some honesty from remainers, just for once. And let's have an end to their lies about the future of our kids which are really about nothing more than anti democratic political aims.
Posted by Unknown at 11:52 am